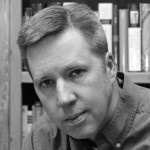 In May 2013, Philip became the main Teaching Pastor in a new church plant. A group of approximately ten like-minded families planted Trinity Bible Church, a Christ-centered church committed to teaching and obeying the word of God. Trinity Bible Church supports Philip part-time, and he works one or two days each week away from the church to augment that support. He is currently the only vocational pastor at Trinity Bible Church, but receives much help and support from lay-leaders in the body.

Philip married his wife, Debbie in 2005. On January 14, 2010, they welcomed their first child, Jillian. Philip, Debbie, and Jillian live in Whatcom County between Lynden and Blaine.

Philip teaching at a Pastors’ Conference in Mont Rouis, Haiti 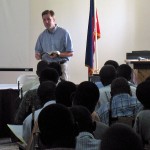 In addition to ministry at Trinity Bible Church, Philip is involved with Starfish Ministries. Starfish Ministries is committed to bringing the gospel of Jesus to the people of Haiti. They do this through an orphanage, several schools, a medical clinic, disaster relief, and well-drilling. They also participate in crusades and Bible conferences. In Haiti, Philip preaches in local churches and at evangelistic crusades. He has also taught at pastors’ conferences and lay-leader seminars. He also works with short-term mission teams who travel to Haiti from the United States and Canada.

When not ministering at Trinity Bible Church, to his family, or with Starfish Ministries, Philip enjoys photography, reading, and writing (you can find his children’s book, Back in the Bay, at Amazon.com or CreateSpace.com). He’s also known to putter occasionally outside the house with his chickens and his fruit trees.